Ever tried everything in an impossible situation and come up with nothing?  Ever wondered if God could really make a difference in what you see as a situation that will never change?

Meditating on faith and my own feelings that I don’t have faith, I was looking at the story in Mark 9:14-29 and found a man that had thrown everything at an impossible situation.  His son was possessed by a spirit that robbed him of his speech.  It would seize him, throw him to the ground, causing convulsions.  His son would foam at the mouth, gnash his teeth and become rigid.  I bet this father, had been to countless doctors, sought advice from religious teachers of the law and tried everything since the boys childhood years to find healing for his son.  Now here, this same father is asking the disciples to help him.

Yet again, he is seeking a solution to an impossible situation.

This man has tried everything and is like any good parent, diligently following the next logical step in finding healing for his son.  When he says in v18; “I asked the disciples to drive out the spirit, but they could not,” you can just hear the discouragement in his voice.

Sometimes living with impossible situations for years, can wear us down.  He is worn out.

Jesus asks him: “If you can?”  I can just see the surprise on Jesus’ face, the raised eyebrow, the questioning look.    Before Him, He sees one who no longer believes in an All-powerful God, the Sovereign God who reigns.  Despite the history of the Jews which this man has learnt since childhood, he no longer believes it is possible for God to make a difference in his situation.  Then Jesus makes an amazing statement: 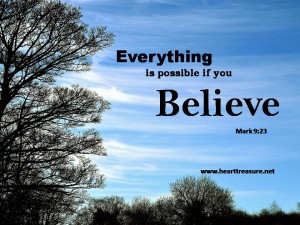 Sometimes we are so busy enduring, diligently looking for the next step in our journey towards healing, that we forget exactly WHO it is we have entrusted our lives to.

Some of us are on long journeys of faith.  Some are walking out of a divorce or an abusive relationship with no end to pain in sight; others have a child that has a diagnosis written over them that they are never going to outgrow and you, as parent wonder about their future and how to help them. Still others are walking alongside life partners that are fighting their personal battle with addiction, depression etc and we have no choice, we have to go with them on the journey.  Others are sick and we don’t know if we are going to get better, if our loved ones will get through this time of illness.  Still others are in such a big black hole, that we think it will be easier to bail out completely, than to hope for relief.

In the midst of this long, long journey of faith, we forget that we have entrusted our lives to God.

God for whom, nothing is impossible.  We, just like this man, stand before Jesus and say: “If you can do anything, take pity on us and help us.”

The measure of faith that has been given us… is only just so much! 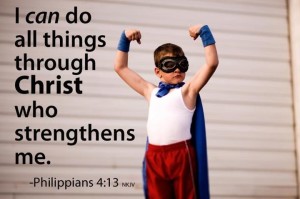 So when Jesus reminds him that it is what you believe about God that triggers the supernatural; that makes all things possible, he realizes that his faith is limited.

But he also does not believe in the sovereign, supernatural power of God!  He realizes this too and says: “…Lord help me in my unbelief.”

Some of us believe with the measure of faith that we have, but not the faith required for the impossible.  Don’t feel bad, neither did the disciples actually, for they could not drive the demon out.

Later, Jesus gives the secret to triggering the impossible to happen.

When the disciples ask why they could not drive out the demon, Jesus says: “…only by prayer.”  Jesus is talking about believing prayer, not just prayer for the sake of prayer.  FAITH-filled prayer triggers the impossible.

Don’t believe me, look at the story of the raising of Lazarus.  Jesus says to Martha: “did I not say that you would see the glory of God if you believed.”  (John 11:40.)  In Mark 11:23-24 after Jesus has caused the fig tree to wither overnight, He says:

“Have faith in God.  I tell you the truth, if anyone says to this mountain, ‘Go throw yourself into the sea,’ and does not doubt in his heart but believes that what he says will happen, it will be done for him.  Therefore I tell you, whatever you ask for in prayer, believe that you have received it, and it will be yours.”

Prayer unlocks faith in our lives.

When we start to pray about it, we start to believe and this triggers solutions of our impossible.  God’s answer to our faith, is to respond.

Perhaps the first prayer we should pray is: “Lord I believe, but please help me in my unbelief.”

Here was the crux of it! The essence of why I was failing to believe for “immeasurably more than all I could hope or imagine.”

I had been on a long journey of faith, more focused on surviving and finding solutions than believing that God could do the impossible in my situation.  I had tried everything and had long since stopped believing in the impossible.  I did believe that God would help me in my situation, that He was with me in it, but I did not believe He could change everything.  I was just like this man asking: “Can you God?”  I WAS enduring, not believing.  My faith had eroded in my spiritual weariness.  I was exactly at that place: I believe, but I don’t believe.

Also, very relieved that the disciples also failed in this.  Seemed to be more common that most people think.  I couldn’t remember when last I had prayed for the impossible, when last I had even believed that God was able to make the changes I so desperately wanted to see.  I realised that I, at the least, had to start praying about it again.  The Lord would build my faith, but I needed to trigger that faith in me, by praying about it again.  By praying about it, perhaps I could start to believe.  Lord help me in my unbelief.

I heard this conversation with God: “Michelle, you need to wake up to the possibilities in your life, you are asleep to the “impossible” potential in your life.  You need to start asking for the impossible in your life.  I am asking you to partner with ME, not to go do that which is impossible , but to see the impossible happen.  Be LED by the Holy Spirit like a horse on a rope.  The leader of the horse does not tell the horse where they are going, he leads one step after another.  All you need is faith as small as a mustard seed and a heart that follows.”

I had to start believing in the impossible!

Next: Certain or Experimental Faith