Who Was It They Crucified?

All of us need to clarify this in our minds.  Was it just an ordinary man, a good teacher, or was it the Son of God?  With Easter, I always choose to meditate on one aspect of the crucifixion story to appreciate again my own salvation.  Looking at John 18 and Jesus’ betrayal in the garden by Judas, there are some interesting little details that I have never seen before.

When Judas came to the garden, he brought with him a “detachment of soldiers and some officials from the chief priests and Pharisees.  They were carrying torches, lanterns and weapons.”(John 18:3)

Just who did they think they were coming to arrest, that such a large group of soldiers, armed to the hilt, was necessary?  Did they think that Jesus was going to make a run for it, and they would need torches and lanterns to find him?  Either way, it is clear that they were expecting some kind of fight.

It is clear, that Jesus was considered powerful to all that were present at the arrest. Matt 26:57 (King James)

And they that had laid hold on Jesus led him away to Caiaphas the high priest, where the scribes and the elders were assembled.

The forcefully arrested Jesus and “led him away.”  That phrase comes from the Greek word ‘apago’, and is the same word used to describe a shepherd tying a rope around the neck of a sheep and leading it away down a path that it needs to go.  Jesus with a rope around his neck, followed the soldiers, just like a sheep would follow a shepherd, to fulfill Isaiah 53:7 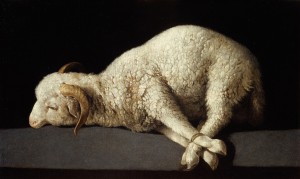 Even though Jesus had proved that He could not be taken by force and all those present knew of His power, Jesus willfully surrendered to them, knowing that it was part of the Father’s redemption plan for all people.

What is so clear is that no one took Jesus to the cross, it was Jesus voluntary choice to go with the soldiers.  To be the lamb slain for our sins so that you and I could experience forgiveness of sins, a relationship with God and eternal life with Him in heaven.  That is who it was they crucified.

Thank you Lord for giving up your life, so that you could redeem mine. Thank you that through your death on the cross, I can experience forgiveness of sin. Thank you for coming into my life, establishing me in a relationship with You as your child and giving me a life that is full and meaningful because of what You did on the cross for me.