Uncertainty seems to be the characteristic of this season we are experiencing.  We are uncertain about our circumstances under COVID, unsure in our work environments and uncertain about the future.  What COVID has done, is taken away some of that self-assuredness, or sense of control, that most of us felt we had.  Now, as we struggle with uncertainty, many of us are encountering a new experience: the need to wait.

No-one likes to wait through a season of uncertainty. 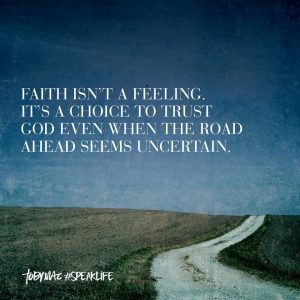 Joseph encountered that feeling in his life, sitting in a dark prison.  He was 100% in the will of God for his life, exactly where God wanted him to be, which was serving and being obedient to God.  God had given him a promise, and Joseph was waiting to see that promise fulfilled in his life, uncertain about exactly when God would move.  This waiting meant that he was not in pleasant circumstances all the time.  In the 13 years in Egypt, including two years in prison, he had faced temptation, seduction, being wrongly accused, hunted, imprisoned and being forgotten.

God was testing Him by making Him wait when things were uncertain.  Often we are made to wait through many different seasons and circumstances as God tests our character in preparation for the future and our future.

Remember friends, that after this season of lock-down and social distancing, there is a future for which God is preparing His people.  As we sit in this season of low tide, working at our momentum, God is still working.

In Joseph’s case, God was working behind the scenes:

God was working, but it was not the appointed season for Joseph yet.  Still, God was preparing Joseph for the future too. Psalm 105:16-22 tells us what God was doing, note the highlighted phrases.

“He called down famine on the land and destroyed all their supplies of food;
and he sent a man before them – Joseph, sold as a slave.
They bruised his feet with shackles, his neck was put in irons,
till what he foretold came to pass, till the word of the Lord proved him true.
The king sent and released him; the ruler of peoples set him free.
He made him master of his household, ruler over all he possessed,
to instruct his princes as he pleased and teach his elders wisdom.”

God positioned and tested Joseph’s character and faith in preparation for what God had planned for Him to do.  To be sure, this time of waiting and uncertainty was not WASTED time for Joseph.  Instead, it developed and proved Joseph’s character until the appointed time, which prepared Joseph to enter the world in a position of leadership, the world being better for Gods people in it.

Father, thank you that your promises are yes and amen.  You are faithful to Your Word, and we can count on You who never changes.  Thank you that as we experience this season of waiting and uncertainty, we can rest in the fact that You are still working around us.  Help us to be more sensitive to the Holy Spirit as You work in our hearts and minds, proving them according to Your truth and not the world’s truth.  Help us to lift our spiritual vision beyond this season to the future that You have planned.  Help us to be obedient to what You have revealed to us right now.  I declare that although this is an uncertain time, I am certain of God, my Father.

We Are At Low Tide