Take Care of Your Mat

Ever been in a situation where the answer to your problem is right in front of you, yet you cannot see it.  Then someone comes along and says one thing and suddenly you know exactly what the answer is.

“As Peter travelled about the country, he went to visit the Lord’s people who lived in Lydda. There he found a man named Aeneas, who was paralysed and had been bedridden for eight years. ‘Aeneas,’ Peter said to him, ‘Jesus Christ heals you. Get up and roll up your mat.’ Immediately Aeneas got up. All those who lived in Lydda and Sharon saw him and turned to the Lord.”

Aeneas was paralysed and had been for eight years (which means that he was not always paralysed.)  He was bedridden, unable to move and dependent on other people for his livelihood.  Peter finds him and says: “Aeneas, Christ heals you.”  Present tense!  Peter states a truth that Christ can heal and is continually healing us.  Then he tells Aeneas “Get up and take care of your mat.”  It is almost like he is saying: “Aeneas, Silly-Billy, have you forgotten…  Get on with it now.”

It’s almost as if Aeneas has forgotten who Jesus Christ is and what he is capable of.  In that simple statement Peter reminds him that not only are his sins forgiven, but his healing is already locked up for him in Christ. (Psalm 103:3)  The healing that Aeneas sought was already his by faith, simply believing, he just had to get up and take hold of it.

Aeneas was not just physically paralysed, but he was in a state of spiritual paralysis too.  His faith had become static, where he had the understanding in his head but was not putting his faith in action.  Peter tells him to “take care of his mat” or in other translations “take care of your bed” which refers to his current situation, what his life was like now and what he had with him now.

It seems that the light bulb went on for Aeneas, since scripture says that he immediately got up, rolled up his mat.  He seemed to realize that he was static and wasting time, paralysed but not incapable, he realized his spiritual state.

There is a similar passage in Rev 3:2 “ Wake up! Strengthen what remains and is about to die, for I have found your deeds unfinished in the sight of my God.”

This is written to the church of Sardis which was a wealthy church, looking spiritual on the outside but dead inside, they were spiritually asleep (lacking passion).  The Lord is telling them to wake up to the times and strengthen what remains, they are to: “Remember, therefore, what you have received and heard; hold it fast, and repent.” 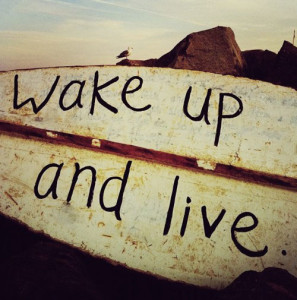 So often we wait for something or someone to come along and end our current situation, but very often God has already deposited the truth into our hearts.  We know what scripture says and are familiar with truth and know God, but we fail to apply faith to that truth and act upon it.  So right now, we are in trouble, we are waiting for a solution to the situation to come forth.  But we fail to remember that nothing is impossible for God and that He longs to restore our lives “from the pit” and “crown us with love and compassion” (Psalm 103:4)

This is a wakeup call to us.  Peter says: “Wake up now, you know the truth of scripture. Strengthen that which you still have in your current situation, refocus your life on Christ and start believing and working towards your miracle.”

Psalm 103:2-5 Praise the Lord, O my soul, and forget not all his benefits – who forgives all your sins and heals all your diseases, who redeems your life from the pit and crowns you with love and compassion, who satisfies your desires with good things so that your youth is renewed like the eagle’s.”