There was a woman at church that I secretly watched for many years. I don’t think she ever knew how she influenced me.  She was always at peace, always had something kind to say and even when they seemed to being going through the most difficult financial times, she would be fine.  Smiling, always joyful, she was radiant!  She worked hard in church; was well liked; people would ask her for advice!  She served with a good attitude, provided for those in need and drew people like a magnet.  In short, she was what I would describe as truly beautiful! 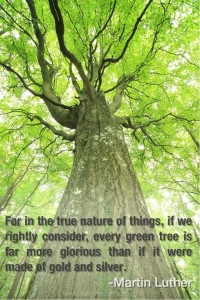 Determined to know her secret, I watched her!  I sat behind her in church, eavesdropped on her conversations, I examined her clothing.  When people spoke about her, I would listen, to hear what she said, waiting for some explanation as to how I could become like her.  Finally I asked God to reveal her secret.  How could I become a woman like that?  He showed me two passages which I translated for me:

Psalm 1:3 “she is like a tree planted by streams of water which yields its fruit in season and whose leaf does not wither.  Whatever she does prospers.”

Jeremiah 17:7-8 “she is like a tree planted by that water that sent out its root by the stream.  She does not fear when heat comes, her leaves are always green.  She has no worries in the year of drought and she never fails to bear fruit.”

So how does one become a she-tree like that? Psalm 1 said that “her delight was in the law of the Lord, and on His law she meditates day and night.”   In other words she spent time in the word of God, not just reading, but meditating on what it had to say.  Jeremiah 17 said that she “trusts in the Lord and is confident in Him.”

I knew her secret: She was rooted in the Lord and in His Word.

What does it mean to be rooted in the Lord? 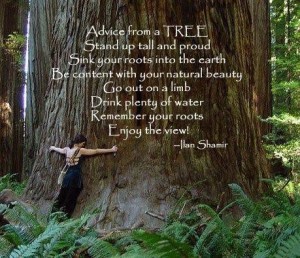 It is also interesting to note that trees that can withstand wind are used for tasks that require great strength e.g. trees that grow on top of mountains are used as masts on ships.  So the stronger she was, the more God was able to use her for important tasks in His kingdom, like influencing me, a young daughter in the Lord, to start working on my own root system.  To get out my bible, start studying and nurturing my roots, doing my ‘great exchange’ so that I too could become the she-tree described in scripture.

Father, help me to focus on growing the “roots” of my life and not what people see on the outside.  Help me be disciplined in spending time in Your Word, growing and understanding.  Help me to store your promises in my heart and to have something extra for others.

About the Author: admin