Mind on the Matter

Making decisions can be difficult and often the next step is not clear for us.  Often we think or have a feeling of what to do next, but from our past experience we don’t trust our feelings and so we are not sure what to do.  God would not want us to make decisions based on feelings, but wants us to have all the facts in order to be confident.

In Jeremiah 32, Jeremiah does not immediately act on his initial feeling to buy the field of Anathoth, even though it came to him in his “quiet time.”  Probably because it involved money, the land was already captured by the enemy and probably not a good investment.  Jeremiah used his own intelligence and questioned what he thought he had heard from the Lord.

So he waited for the Lord to completely fulfil His words to him, before taking action.

He observed what was happening to him and around him. When his cousin bought the external evidence of God’s direction, it confirmed what he felt (or knew) inside already.  Then he “knew that this was the word of the Lord.” (verse 8)

Jeremiah waited until God confirmed his feeling though a providential act, then with a clear view of facts he worked.  God then used this, to bring conviction to others in verse 15. 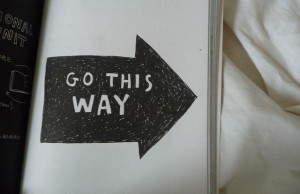 It is an important point to remember: Often we act when we have a feeling on a matter, instead of waiting for confirmation of God’s mind on the matter and only then acting.

We need to listen to the Shepherds personal voice to us, like Paul demonstrates again in Acts 16:6-10.  Paul knew that they were not to go to Asia, so he tried to go to the region of Bythinia but found he could not.  He continued on to Troas, a coastal city, which was in the opposite direction and waited.  He LISTENED and EXAMINED God’s providential work in their circumstances, how God blocked the way and waited until he had a clear vision in order to fully understand the mind of God.  Then once the vision confirmed his feelings, he proceeded to Macedonia.

God will confirm what we think or feel He is telling us.  Don’t decide in your heart what you will or will not do, without waiting for God to make things clear and confirm it.  Be sure of the way.  As long as the way is not clear, there is no call to action.  God holds Himself accountable for all the results of keeping you exactly where you are. I wrote this down in my journal once:

Wherever God’s finger points, His hands will clear the way.

In ways we do not always anticipate, God will lead the way.

If you have found this post helpful, also read:

How to position yourself to hear from God