I personally would hate to be described as inconsistent.  Simply because someone had observed that what I say is not consistent with how I live my life, my words are not always truthful, or I pretend to be that which I am not.  It is also the one characteristic I find so lacking in the world we live in today, people who are consistent seem to be few and far between.  Do we know many people we can count on?

In the world we live in, we don’t always know where we stand with people, or who they really are.  We admire people who are “real,” meaning there is an authenticity to them.

I don’t want to be like that, I want to be a consistent person.  Someone people can count on, including myself and my family.

A consistent person lives their life based on what they believe every day.  When we don’t live consistent with what we believe, then there is space in our lives for contradiction and compromise.  When we are not consistent we are at a loss as to what we ought to do, how we ought to live.

Jesus is consistent, He is the same yesterday and today and forever (Heb 13:8) and throughout scripture God calls His children to consistent living, to be holy as He is holy.

Living consistent is a wise and godly approach to life.

We live in a world that gives us permission to quit when the going gets tough.  It allows a way out when something does not suit us anymore and allows us to get out of a commitment at the last-minute.  It is a world that excuses bad behavior and entertains all opinions without making any moral judgment or call to action.

But consistent people sow seeds of effort all the time.  They never get fatigued doing good, they get involved, they don’t give up, or quit. (Gal 6:9)  Even in their old age, or difficult times, they are consistent and inevitably flourishing. (Ps 92:13-14).

What I am beginning to understand is that what we believe must be translated into how we live and how we live should become more and more consistent with what we believe.  James 2:14-26 has much to say about our lives matching our faith, but the ones we admire are the people like Abraham and Rahab who lived out their beliefs consistently, no matter what.

James 2:22 You see that his faith and his actions were working together, and his faith was made complete by what he did.

Consistency is a characteristic of believers, even on their off days. 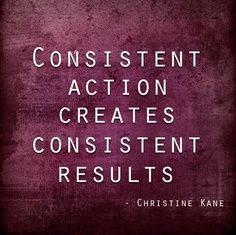 It does not come naturally to be consistent, it has to be worked on.  It takes daily decisions not to “opt out,” to be honest, truthful and have integrity.

I am trying to become more and more consistent, starting with keeping commitments.  No more little white lies to avoid telling the truth, doing what I said I would do.  When I cannot commit to something, being honest with myself and people around me, even if it means that as I communicate what I cannot do, right up front, people might not like what I say.  That way, I know what I commit to, can be done.

Father, help me to live according to what I believe, with constant faith and trust in You.  Help me to live consistently before others so that they know I can be counted on.  Help me to do what I committed to, to pitch up and not make excuses.

My Word is my Bond